These made from scratch, Gluten-Free Almond Flour Brownies are easy to make, have a rich chocolate taste, and are incredibly moist and fudgy. They are so delicious everyone will be asking you for the recipe!

Jump to Recipe Pin the Recipe

I just love desserts made with almond flour. I have a few dessert recipes where I've combined regular flour (all-purpose flour) with almond flour, and the results have been amazing. You can see how I used both flours in this Cherry Almond Cake, in these Mini Matcha and Almond Bundt Cakes and in these Chewy Almond Marzipan Bars.

These have to be the most decadent, fudgiest, ultra-moist homemade brownies I’ve ever baked! They are dangerously delicious and self-control will come in handy when resisting a second or third piece 😉.

This easy recipe yields moist, dense and fudgy brownies that are much better tasting than pre-mixed boxed versions. Though you'll find several delicious brownie recipes on this site, this is the only one which is gluten-free. I adapted this recipe from this brownie recipe over at Food and Wine.

Though these brownies are made with almond flour, the taste of almonds is barely noticeable. If you want almond flavoured brownies, you'll have to add almond extract (a little goes a long way).

A superfine blanched almond flour was used for this recipe to replicate the texture of brownies made with wheat flour.

These brownies are not meant to be low carb or suitable for keto diets. They contain granulated sugar, regular semi-sweet chocolate chips and chocolate bars.

However, you may be able to make these brownies if you are familiar with using alternative sweeteners (monk fruit), and have some stevia-sweetened (or other) chocolate chips. If you do try it, I would love to know how it went in the comments below.

How to make these Brownies

I used an 8 by 8 baking pan for these brownies but you can also use a 9 by 9 baking dish. If you do, you’ll want to reduce the baking time by a couple of minutes since the size of your pan will affect how quickly the chocolate brownies bake. A larger pan will yield thinner brownies that will bake slightly faster.

To make it easier to lift the brownies out of the pan, grease your baking pan and line it with parchment paper, leaving an overhang on two opposite sides.

Making gluten-free brownies from scratch is easy when you have a recipe that uses simple ingredients. There are ten in this recipe, all of which you may already have in a well-stocked baking pantry.

Here's an overview of the ingredients you'll need. Please see the recipe card at the end of the post for ingredient amounts.

How to Bake Chewy Brownies

You'll need to bake these brownies for 30 minutes, give or take a couple of minutes, for what I consider the perfect chewy brownie texture. Below is a picture of a batch of brownies that I baked for about 26 minutes. They were incredibly gooey and very much like molten brownies.

But since I prefer my brownies a bit more set, I baked another batch. I took them out at 30 minutes and let them cool for at least an hour before slicing. Those are the ones pictured throughout this post. I found 30 minutes to be the optimum cooking time for fudgy and moist brownies.

Since all ovens are different, I recommend checking the middle of the brownies (since the edges bake faster) with a toothpick at 26 minutes the first time you make them. There should still be crumbs and melted chocolate on the toothpick. If the toothpick comes out clean, your brownies will still be delicious tasting but not as soft and gooey in texture.

For extra gooey, molten like brownies, remove them from the oven at no more than 28 minutes.

You can serve these delicious almond flour brownies at room temperature or slightly warm with a scoop of vanilla ice cream for an extra decadent chocolate treat.

Leftover brownies can be stored on the counter or refrigerated for up to five days.

Brownies can also be frozen in an airtight container for up to 3 months. Thaw brownies overnight in the refrigerator. Warm slightly in the oven for a freshly baked taste. 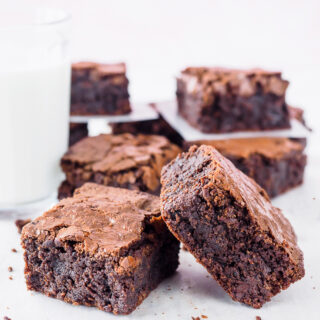 Can you sub the butter for coconut oil?

Hi Abby, yes you can substitute the butter with an equal amount of coconut oil.

My wonderful son-in-law is gluten intolerant. Since he often has to pass on desserts at family gatherings because they are not gluten free, I decided to try your recipe as a special treat for him. They were delicious!! Moist, chewy, chocolaty yumminess! They were a hit with everyone, especially Bill. Thank you so much, I will be making these often.

Hi Beverly, I'm so happy you wrote to tell me how much your family enjoyed these brownies. It's nice to know when my recipes are a hit. I was especially glad to hear that your gluten intolerant son-in-law was also able to enjoy them!

Dumb question, but I’m getting into tracking my calories. Are the nutrition facts for one serving or the whole batch?

Hi Ally! It's always good to check when in doubt. The calories are per serving. So if you divide your brownie tray into 16 equal servings, each serving is 256 calories. Hope that helps!

Hi Kim, so happy to hear you enjoyed these gluten-free brownies!

Can I substitute the granulated sugar for lakanto monk fruit sweetener?

Hello Anne, I'm really sorry but I don't know, I've never baked with lakanto monk fruit sweetener, I've only tried it in drinks. I did a quick google search and it looks like it could work. Maybe do a test batch before the event just in case it doesn't work out. If you do try it, let me know how it turns out, good luck!