Built on the classic combination of fruit, cheese and nuts, this Pear and Brie Crostini is a delicious, elegant and simple to make pear appetizer.

Jump to Recipe Pin the Recipe

Have you ever been to a dinner party where all they served were appetizers? Well I love such parties. I think it's so much fun to be able to sample so many different nibbles and experience all the various flavours and textures.

Some of my favourite appetizers are those that combine both sweet and savoury elements in the same bite. This baked Pear and Brie Crostini does exactly that.

How to make this Pear Appetizer

This is such an easy canapé to prepare. Here's an overview of the ingredients and steps needed to make this pear and brie appetizer recipe.

To make it, start by slicing a baguette into one-half inch rounds. Place the slices of bread onto a baking sheet and brush the tops with a little olive oil.

Toast the bread under the broiler for a couple of minutes or just until the bread is golden. If you like you can do this step up to 3 days ahead of time. Simply let the crostini come to room temperature before storing them in an airtight container on the countertop.

To finish making the appetizer, add a slice of brie on top of the crostini and then top the brie with a slice of pear.

Put the tray of assembled crostini under the broiler until the cheese starts to melt. Remove from the oven and then drizzle with the honey and balsamic syrup.

Top each crostini with toasted crumbled walnuts, a sprinkle of fresh thyme leaves and a dash of freshly ground pepper. Serve immediately.

This baked brie with pears crostini can be served alongside other canapés or with a meat and cheese platter. I like serving it with a bowl of these easy to make Maple Spiced Walnuts or these Rosemary Roasted Almonds.

With a season full of special occasions upon us, it's great to have delicious, elegant and yet simple to make appetizers in our repertoire. 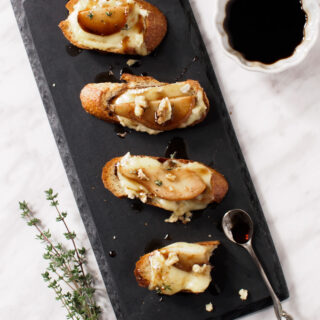 How far in advance can you make the bread for bruschetta?

Hello, up to 3 days ahead of time. Make sure to let the bread cool completely before storing in an airtight container. Also, if there is a lot of humidity in your home you may need to crisp up the bread a bit before topping. Hope that helps!

These costinis are to die for. I love the combination and the honey-balsamic drips. Yum!

Thank you Fae, it really is a delicious combination!

[…] Pear and Brie Crostini via Sweet and Savoury Pursuits. These sound so sweet and savory. […]

What a great appetizer! Looks so elegant and the taste would be amazing. Brilliant!

Thanks so much Cindy!

OMG, this looks absolutely scrumptious! How do you think this would work with blue cheese or gorgonzola and walnuts? I love toasted blue cheese and almonds.

Thanks! I think it would be delicious with blue cheese and even more so combined with walnuts :)